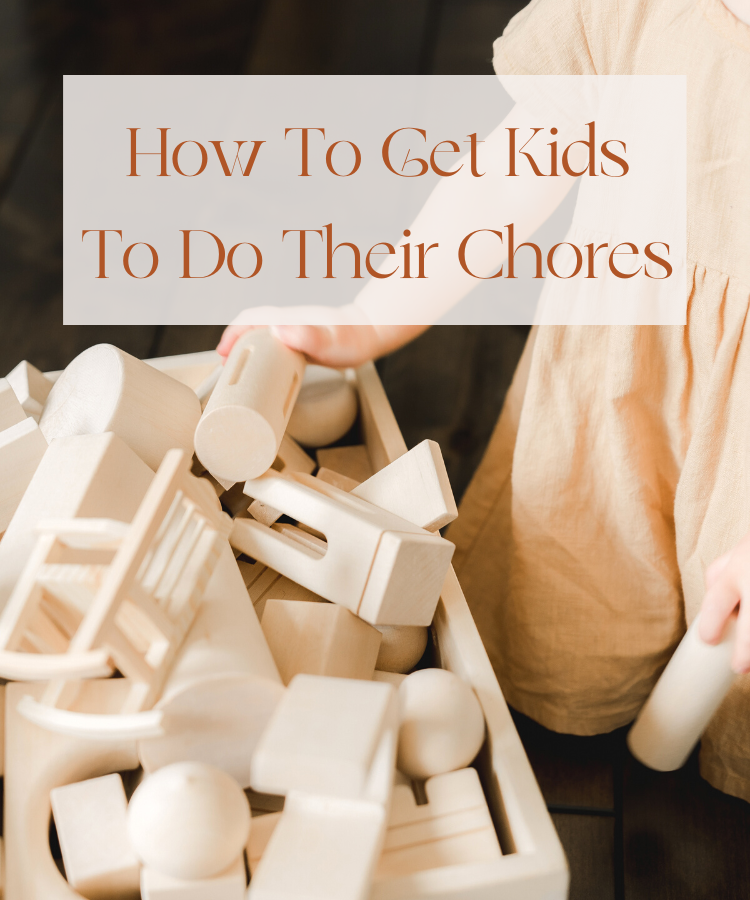 How To Get Kids To Do Their Chores

We readily admit that talking about how to get kids to do their chores can be a loaded subject. If we know anything, we know that each child is different and strategies to *motivate* them often vary. For example, we have a few children who are born helpers and are always following us around with their own mini brooms as we sweep up after dinner. They may mess with our dirt piles, but a little coaching goes a long way when they already want to help.

On the other hand, we have children who cannot be bothered to stop what they’re doing to go to the bathroom, let alone pick up after themselves. The bottom line is whatever kinds of kids you’re living with, we get it. So, let’s talk about tips.

Why Kids Should Do Chores

If you grew up around the time we did, you probably had nightly chores. We’re no strangers to making our beds or participating in a dishwashing assembly line, especially after we baked with our grandma. We wanted to bring some of the concepts of hard work and contributing to the household to our kids. Not only do chores help kids learn responsibility and self-reliance, but they also give younger family members a sense of pride in helping the family thrive.

As we’ve all probably heard, too, research shows that children who do chores often have higher self-esteem; are more responsible; and are better equipped to deal with feelings of frustration, adversity, and delayed gratification. But, actually, getting some of our kids to do chores? Therein lies a problem.

How To Get Kids To Do Their Chores Without Nagging

Like anything kid-related, motivating our children to do chores without nagging can be difficult. You may have to try a few different tactics before something sticks. And, even then, you’ll have to adjust often. We don’t always bribe per se, but we’re certainly not above offering an incentive.

Regardless of the child and his or her personality, we’ve found the most effective way to get our kids to help around the house is to explain to them how they’re contributing and why it matters. When that falls on deaf ears (which it does often with teenagers especially), we’ll start testing incentives: Want to go out with your friends this weekend? Check off all your chores for the week. Want a popsicle after dinner? Do your part to load the dishwasher the way mom taught you. Getting kids to do their chores doesn’t have to be frustrating, but it does often require quite a bit of pre-thought and strategy!

As we mentioned above, we do often incentivize our kids to do their chores. When we think of bribes, our minds immediately go to candy and sugar and cash, which are low-hanging options, however, we play the long game. We’ll sit down with our kids and ask them what they really want: A new pair of sunglasses that cost $40, let’s say. Together, we write out a plan to earn them those sunglasses. We assign dollar amounts to chores and give them a little bit of choice in what chores they do. Then, we track their progress.

Not only does this process work well for incentivizing, but it also brings together math and writing, and planning. Writing it out in a notebook works perfectly fine, however, we are big fans of chore charts and chore cards.

As The Bargain Sisters, we’re always looking for ways to help you save—not only money but time. We pinned a few of our favorite free printable chore cards and chore charts. A simple search on Pinterest brings up SO many options, including charts specific to toddlers and teenagers (who, in our experience, have a lot in common…mostly in attitude!).

If you’re interested in something you don’t have to remember to print, though, we have ideas for those, too.

This chore chart is extremely visual, which is great for younger kids who are learning to read or are more visual learners. It has magnets to track progress, an attached whiteboard, and options for the responsibilities your kiddo wants to track. $16.39 gets you 90 magnets, two boards, and a lot of help around the house!

Often the simplest option is the best one and that’s certainly true for this magnetic chore chart. You can buy one for $11.99 or a set of three for $22.99. If you have multiple kids spanning a range of ages, it’s a great option.

Speaking of sets, this one has a few different colors to choose from. If you have two who want pink, however, battles may ensue. It also allows you to set a weekly goal and track it. Plus, you can write out the reward for reaching the chore goal while you’re at it. These charts are a great option for parents who like to gamify getting kids to do chores! (Like us) $18.99 for three charts and ten markers.

For the kids who like to have their chore charts somewhere other than on the fridge, this portable option includes illustrations, kids memo checklists, four pieces of DIY cards, and the satisfaction of sliding the checkmark button. No whiteboard markers required here! $12.99, plus save an extra 5% when you clip the coupon.

When aesthetics matter, enter: Target’s U Brands Chore Pad. It has 52 colorful pages on a large pad that can be ripped off and recycled week to week. They’ll be keeping track and checking off chores in style with this pad. It also rings in at just $4.99, the lowest price of the bunch!

As a reminder, we’ll always share deals we see on the items we list in our blogs in The Bargain Sisters Group on Facebook and on Instagram, @the_bargainsisters. Make sure you’re following us to stay in the know!

Getting kids to do chores is not only beneficial for everyone in your house, but it is also fun! Turn on some music and have a dance party while putting away toys, tell stories while you fold laundry, or teach them how to practice mindfulness while doing the dishes. There are so many positives to doing chores that we don’t even entertain any whining, especially when we can show our kids how much fun we’re having while doing our chores. And, if you’re anything like us, you may sometimes battle your husband over who does the dishes and who gets the kids ready for bed! Rock, Paper Scissors is our go-to for that battle.

What kinds of chores do your kids do? How do you make them fun? Tell us in the comments. We’re always looking for new ideas!

Sign up here to get the latest deals, best sellers and exclusive codes delivered straight to your inbox.

We use cookies on our website to give you the most relevant experience by remembering your preferences and repeat visits. By clicking “Accept”, you consent to the use of ALL the cookies.
Do not sell my personal information.
Cookie SettingsAccept
Manage consent

This website uses cookies to improve your experience while you navigate through the website. Out of these, the cookies that are categorized as necessary are stored on your browser as they are essential for the working of basic functionalities of the website. We also use third-party cookies that help us analyze and understand how you use this website. These cookies will be stored in your browser only with your consent. You also have the option to opt-out of these cookies. But opting out of some of these cookies may affect your browsing experience.
Necessary Always Enabled
Necessary cookies are absolutely essential for the website to function properly. These cookies ensure basic functionalities and security features of the website, anonymously.
Functional
Functional cookies help to perform certain functionalities like sharing the content of the website on social media platforms, collect feedbacks, and other third-party features.
Performance
Performance cookies are used to understand and analyze the key performance indexes of the website which helps in delivering a better user experience for the visitors.
Analytics
Analytical cookies are used to understand how visitors interact with the website. These cookies help provide information on metrics the number of visitors, bounce rate, traffic source, etc.
Advertisement
Advertisement cookies are used to provide visitors with relevant ads and marketing campaigns. These cookies track visitors across websites and collect information to provide customized ads.
Others
Other uncategorized cookies are those that are being analyzed and have not been classified into a category as yet.
SAVE & ACCEPT